“The trouble with self-publishing is: it’s too easy to do badly.”

This is a phrase I find myself saying far too often, on my travels as a self-publishing author. So, when I find an indie book that is well-written and well-edited, with a fantastic cover design and an author who has truly understood the value of building a platform for her books, I like to shout about it – and that is what I intend to do with the latest book I’ve read: GHOST TOWN by Catriona Troth.

GHOST TOWN is a unique and brilliant book. Set against a backdrop of the Coventry race riots in the 1980s – a period of British history I (shamefully) didn’t know much about – it was not just a compelling read for me, but also a learning experience. 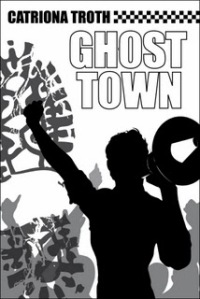 Artfully alternating between the first person voice of Maia, a naïve and conflicted young white 20-something, and the third person viewpoint of Bahjan (Baz: ‘too paki to be white, too gora to be desi’), the story takes us straight to the heart of the racial tensions that erupted across Britain in the early 80s: not the much talked-about Brixton riots, but the persecution of Pakistani and other Asian communities in the midlands.

Then, as now, the mainstream media did little to cover the reality of events and it is clear that the author of GHOST TOWN did a lot of first-hand research to get to the bottom of what really happened. (There is a lot of this on her website.) Young people were killed on the streets in violent clashes. Letterbox fire bombs were commonplace. The police did little to protect Asian families from ugly violence that is seen at close range by Maia and Baz. I get the impression that the gradual ‘awakening’ we see in Maia – her views on race and what it means to belong – is an awakening that the author experienced during her time as a twenty-something in Coventry. The character is utterly believable, as is that of Baz, which must have taken a lot more research in terms of dialect, attitudes and background – again, very convincing.

The plot cleverly weaves the bigger social themes into the main characters’ stories without being clunky or too overt. Much of the plot centres around ‘the Skipper’, a homeless shelter in the heart of Coventry where the two main characters volunteer, and the intriguing range of frost-bitten down-and-outs who use its services. This choice of setting, like the theme of the book and the choice of voice, is unusual and different to that of most books I’ve read. Perhaps that’s why I enjoyed it so much.

It’s hard to liken GHOST TOWN to anything else out there, but there were certainly echoes of Alex Wheatle’s EAST OF ACRE LANE. I would recommend this book to anyone looking to step out of their comfort zone and explore a little-talked-about pocket of British history.

GHOST TOWN is published by Triskele Books and available in all the usual places e.g. Amazon.

“The truth is, it ain’t just a race thing. They talk like it is, but really and truly it’s black against white, young against old, authorities against the rest… There’s bare reasons for feeling vexed right now.”

Feral Youth is story of Alesha – a fifteen year old from Peckham in South London. At the start of the book, Alesha is living under the radar, dodging social services, gang violence and her alcoholic mother. But she has a roof over her head, a friend she owes everything to, a youth centre that provides an occasional refuge, and a ‘rep’ that provides some flimsy protection on the streets.

In the course of a few short weeks over the summer of 2011, even those are taken away. No wonder Alesha’s angry. Angry enough that when messages start crowding onto her phone, telling her riots are kicking off all over south London, she is ready to take revenge on the whole self-satisfied world she sees around her.

Only, it’s beginning to look as if the one person she can really trust isn’t from the streets at all. She’s Alesha’s eccentric former music teacher, Miss Merfield – and she’s trying to tell Alesha there’s another way out.

Courtney has broken some taboos in writing this book. First of all – as many people already know – she is the self-published writer who gained a coveted traditional publishing deal, only to ditch it when she realised she was being shoe-horned into writing books she didn’t really want to write.

To cap that, she has written the book her agent told her not to, the one that was too ‘niche’. (“How niche are young people?” Courtney demands at the launch.)

Finally, she is a young, white, middle-class woman, writing in the voice of a homeless, mixed-race teenager from South London. “You can’t possibly be authentic,” she was told, when she mooted the idea. 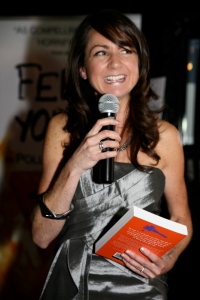 Polly Courtney at the launch of Feral Youth

Courtney refused to be put off. Motivated by her own anger at the ill-informed responses to the 2011 riots in British cities, she spent time with girls from Westwood College in Croydon, learning from their point of view what it was like to be a teenage in South London today, how they saw the riots and the reasons behind them – and most of all, listening to their voices and learning how they spoke to one another.

When the riots kicked off in August 2011, I was away on an oh-so-middle-class family holiday in Cornwall. I looked on from a distance, seeing events unfold on television, reading about then in the newspapers. What I struck me in those first few days was the way commentators were contrasting the supposed ‘mindlessness’ and ‘criminality’ of the 2011 rioters with what they now chose to cast as the ‘legitimate beefs’ of 1981 Brixton rioters.

And did no one think, even for a moment…