Feral Youth is a moving and colourful page-turner that sensitively draws us into the world of 15-year-old Alesha, shedding light on the frustrations that led to the 2011 summer riots.

Born in south London and now a resident of Ealing, one of the areas affected by the riots, Courtney wrote Feral Youth “to give a voice to the thousands of frustrated youths out there who, like Alesha, feel marginalised and ignored by the rest of society”. She believes that the real causes of the riots have not gone away and that further unrest is only a matter of time.

“Being a mentor at Kids Company opened my eyes to another world. When the riots broke out, it was the stories of these children that inspired me to write Feral Youth – and to write it from Alesha’s perspective. There are some burning issues here and I’m passionate about bringing them into the spotlight.”

Through friends and links to charities, Courtney got to spend time with young people in schools and youth groups across south London. Slowly, she got to know some of these so-called ‘feral youths’ and started to build up a picture of their lives.

Most of my time was spent in or around Peckham, where the book is set. I wanted to find out how it felt to be them. Were they angry, or were they just after a new pair of trainers? Why were they angry? Why did they want new trainers? Was it true that guns were as commonplace in this world as iPads in mine?

Delving into this world inevitably attracted suspicion: questions about the book, its angle, the author’s reasons for writing it, but once trust had been established, the young people opened up with honesty and warmth.

I couldn’t help noticing the energy and positivity in these young people. They were passionate, smart and funny. I found myself thinking about the newspaper articles relating to young people’s lack of morals and mindless behaviour. I struggled to match the people eating sugared pretzels in front of me with the descriptions. 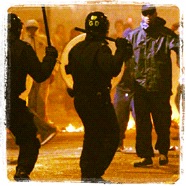 Questions about the causes of the summer riots invited many different replies – an indication that there was no single cause, just as there is no single solution:

‘The looting – that was just kids who wanted new creps [trainers] and that.’

‘It was people who came from other areas – it wasn’t our lot wrecking our community.’

‘Anger at the way things are,’ said one girl, making a point that was also made by many others.

‘Boredom,’ said another, talking eloquently about the lack of jobs for young people. ‘Kids without nothing to do.’

I was shocked at the strength of sentiment these young people had about specific issues. They were very clear on the way the ‘working classes’ had been ‘cheated’ and they felt strongly that the government’s priorities were all wrong. They talked about benefit cuts, ‘pop up’ youth schemes (initiatives that got scrapped after one or two years), withdrawal of the EMA (Education Maintenance Allowance) and the vast amount of money being spent on the Olympics, which could, in their eyes, have gone to a better cause. I confess, I hadn’t expected them to be so political. I asked: ‘If you saw David Cameron walking down the street–’

‘I’d spit on him,’ the whole group said, unanimously.

‘Try being us for a day!’ was a message that kept coming across. ‘‘Feels like we been left behind. They’ve left us behind – they don’t care.’ “

Polly researched the subject by talking and workshopping with young people in schools, charities and youth groups. She also talked to many people who work closely with young people, including teachers, social workers, youth workers and charity workers.

One of the most important findings for Polly was the way in which many young people like Alesha start to fall behind in school from a very early age, often leading onto other issues that are increasingly difficult to resolve. As part of a literacy drive, Polly regularly goes into schools and pupil referral units, opening up Alesha’s world to those who might otherwise feel alienated by academic literature.

Click here to find out about the Feral Youth schools/literacy programme: