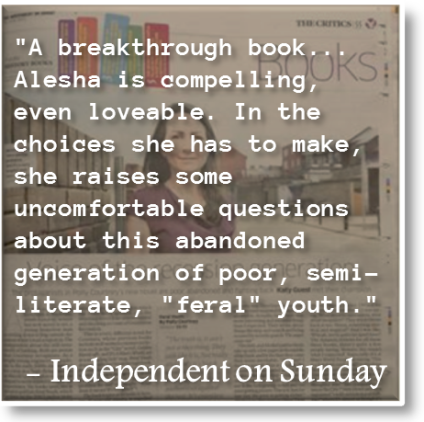 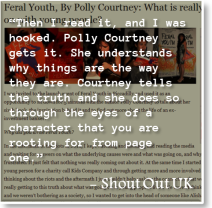 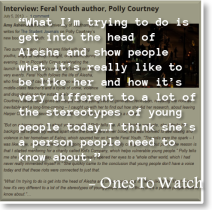 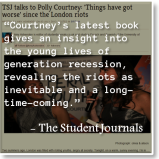 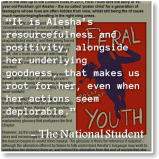 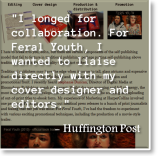 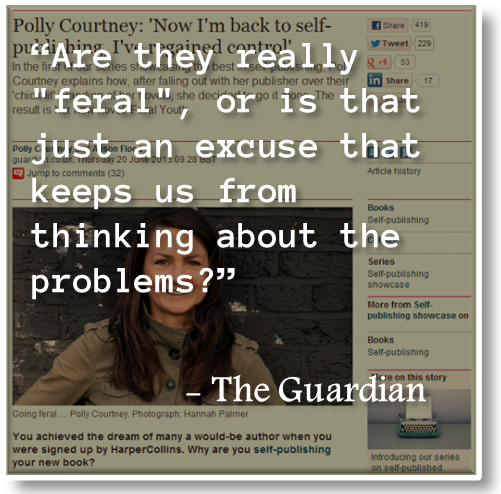 “A breakthrough book… Alesha is compelling, even loveable. In the choices she has to make, she raises some uncomfortable questions about this abandoned generation of poor, semi-literate, “feral” youth.”  – Independent on Sunday

“Are they really “feral”, or is that just an excuse that keeps us from thinking about the problems?” – The Guardian

“Feral Youth is both moving and shocking. It grips from the first page.” – Words With Wings

“A story from the streets: An extract from Polly Courtney’s novel Feral Youth about 15-year-old Alesha, who gets caught up in the London riots.”  – We Love This Book

“Courtney’s latest book gives an insight into the young lives of generation recession, revealing the riots as inevitable and a long-time-coming.” – The Student Journals

“What I’m trying to do is get into the head of Alesha and show people what it’s really like to be like her and how it’s very different to a lot of the stereotypes of young people today…I think she’s a person people need to know about.”  – Ones To Watch

“The more I heard from young people, the more opinionated Alesha and some of the other characters became.”  – The Londonist 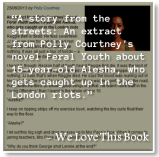 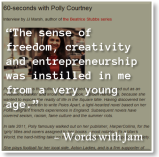 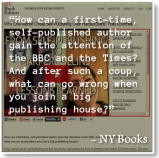 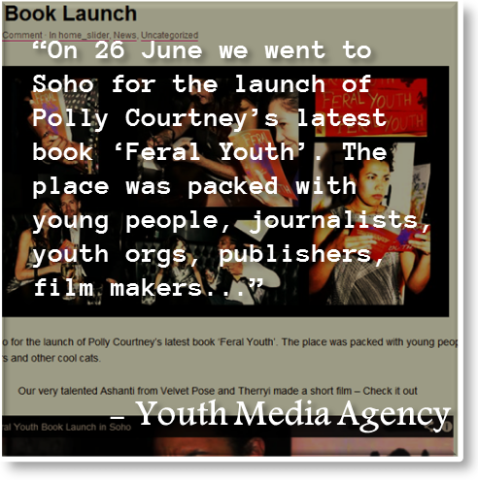 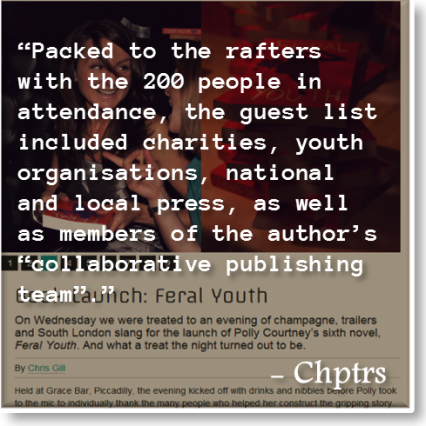 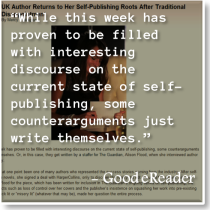 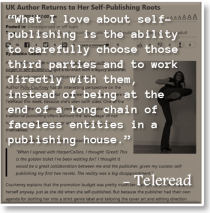 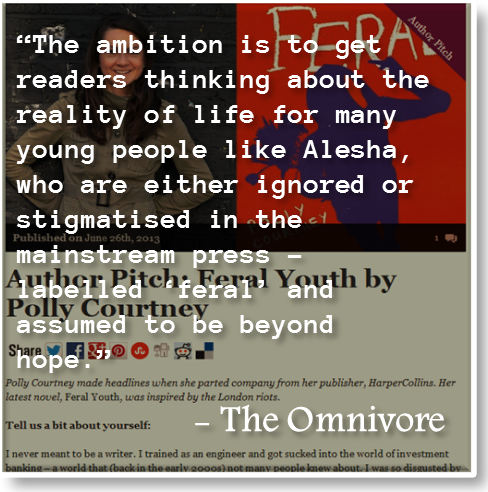 “It is Alesha’s resourcefulness and positivity, alongside her underlying goodness, that makes us root for her, even when her actions seem deplorable, and it is this that pushes the narrative on as we race towards the unexpected ending and a potential new start for Alesha.”  – The National Student

“The backdrop for the novel is the build-up to the 2011 summer riots and it’s written from Alesha’s perspective. The ambition is to get readers thinking about the reality of life for many young people like Alesha, who are either ignored or stigmatised in the mainstream press – labelled ‘feral’ and assumed to be beyond hope.” – The Omnivore

“Then I read it, and I was hooked. Polly Courtney gets it. She understands why things are the way they are. Courtney tells the truth and she does so through the eyes of a character that you are rooting for from page one.”  – Shout Out UK

“On 26 June we went to Soho for the launch of Polly Courtney’s latest book ‘Feral Youth’. The place was packed with young people, journalists, youth orgs, publishers, film makers and other cool cats…” – Youth Media Agency

“I opted to return to self-publishing precisely because I longed for collaboration. For Feral Youth, I wanted to liaise directly with my cover designer. I wanted to seek feedback not just from one lone individual with a subjective view from her ivory tower, but from a stable of trusted, crowd-sourced advisers as well as from my professional editor.” – Huffington Post

“What I love about self-publishing is the ability to carefully choose those third parties and to work directly with them, instead of being at the end of a long chain of faceless entities in a publishing house.” – Teleread

“While this week has proven to be filled with interesting discourse on the current state of self-publishing, some counterarguments just write themselves.” – Good eReader

“How can a first-time, self-published author gain the attention of the BBC and the Times? And after such a coup, what can go wrong when you join a big publishing house?” – NY Book Editors

“The sense of freedom, creativity and entrepreneurship was instilled in me from a very young age.” – Words With Jam 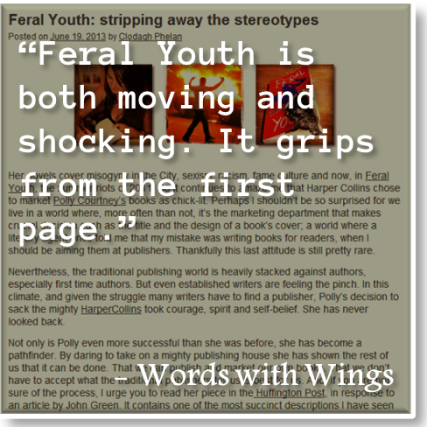 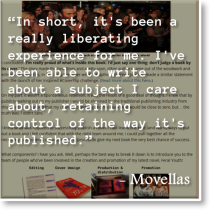 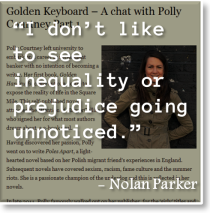 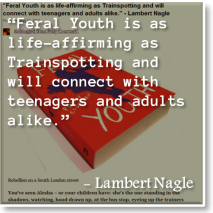 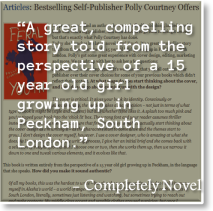 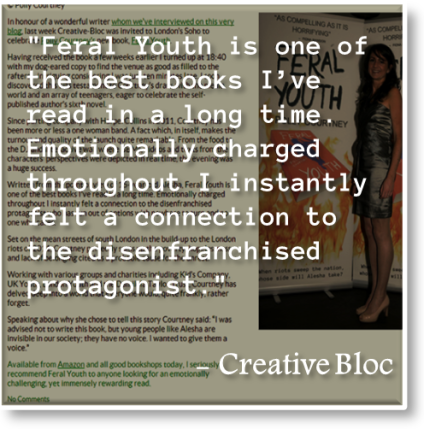 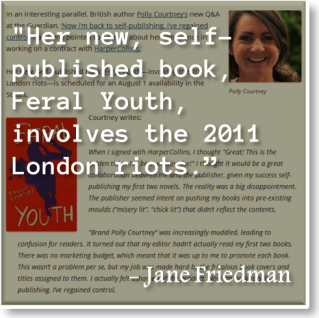 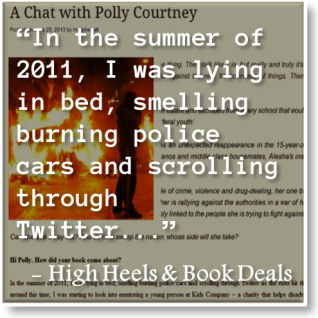 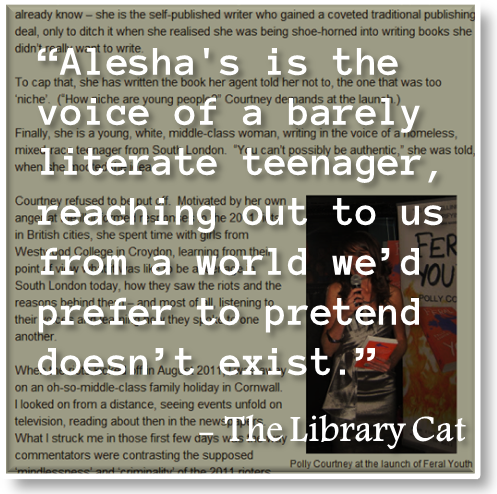 “Walking away from a publishing deal with HarperCollins was a massive step, but one that has given me the freedom to write what I believe is an important story: the story of Alesha, a vulnerable, disenfranchised young person from a generation of disaffected youth.” – Chptrs: Publishing’s Next Chapter

“Alesha’s is the voice of a barely literate teenager, reaching out to us from a world we’d prefer to pretend doesn’t exist.” – The Library Cat

“In the summer of 2011, I was lying in bed, smelling burning police cars and scrolling through Twitter…” – High Heels & Book Deals

“Her new, self-published book, Feral Youth — involving the 2011 London riots — is scheduled for an August 1 availability in the States.” – Jane Friedman

“Feral Youth is one of the best books I’ve read in a long time. Emotionally charged throughout I instantly felt a connection to the disenfranchised protagonist.” – Creative Bloc

“A great, compelling story told from the perspective of a 15 year old girl growing up in Peckham, South London.” – Completely Novel

“Feral Youth is as life-affirming as Trainspotting and will connect with teenagers and adults alike.” – Lambert Nagle

“There was a lack of cohesion between what they believed about themselves and their books and the “profit mindset” demonstrated by their publishers.” – Stand Out Books

“I don’t like to see inequality or prejudice going unnoticed.” – Nolan Parker

“In short, it’s been a really liberating experience for me. I’ve been able to write about a subject I care about, retaining control of the way it’s published.” – Movellas